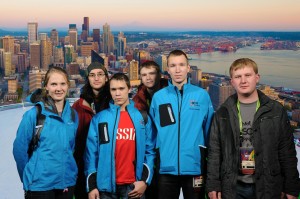 The Cluster Challenge contest for student teams was held for the fifth time as a part of the biggest in the world annual conference on HPC SuperComputing (USA). Eight teams selected from all over the world take part in the contest. The members of the teams try to reach maximum performance on the selected software packages on the limited computational power (first of all energy consumption is limited).

This year, as well as  the previous year, the NNU team is one of the teams selected for participation in the contest. During the preliminary preparation for the contest, the NNU team and the Microsoft company as its sponsor tried to reach the maximum performance of software packages that solve complicated scientific tasks selected by the contest organizers and also tryied to reach the maximum performance of the mounted computer system on the well-known LINPACK benchmark.

The NNU team is the winner of one the principle directions of the contest. Our interns reached the result of 1.9 Tflops on the Linpack benchmark and upstaged the rest participants.